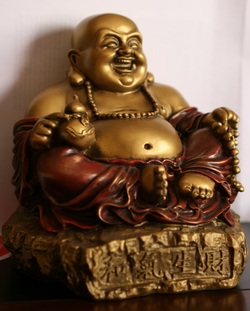 Budai is a Chinese folkloric deity. His name means "Cloth Sack,"and comes from the bag that he is conventionally depicted as carrying.  His full belly indicates his abundance, slowly developed (no one gains such weight overnight) which contrasts his small cloth sack,  for with the truth, ove and joy that he possesses, what need he for material possessions? He is almost always shown smiling or laughing, hence his nickname in Chinese, the Laughing Buddha.   His large ears indicates he is a friend to all, non judgemental and can take joyfully all experience, for there is no space for suffering in a belly filled with laughter.  He is shown as bald, in robes, carrying prayer beads,  this indicates that he vows as a monk, and that he has worked for his attainment.  For with persistent effort anyone can attain and this truth if does not bring now joy, brings hope, and much more later.

The primary story that concerns Budai in Zen (Chán) is a short kōan. In it, Budai is said to travel giving candy to poor children, only asking a penny from Zen monks or lay practitioners he meets. One day a monk walks up to him and asks, "What is the meaning of Zen?" Budai drops his bag. "How does one realize Zen?" he continues. Budai then takes up his bag and continues on his way.

So a useful way of working with this wonderful deity would be to be able to identify as him, or to embody his characteristics.  By this, I mean in a sense, to act like him; to be cheerful, abundant, full of laughter, yet non-attached. To embody the Budai there are several methods; from trying to act like him, to Magickal invocation, to an variation of the 3-2-1 process from Integral Theory.  Which ever practice the path and results are similar so ill outline the process now.

This process can be done in 3 minutes or 30 years.  The results of course would be very different.

Step 1 - getting to know - 3rd person perspective (you)
This consists of getting to know the Budai as someone distinctly separate from oneself.  This could be done through reading about him, imagination or better yet to pray or meditate for knowledge of who he is.  The goal is to gain as wholistic image as possible of him.  Can you imagine how he looks, his mannerisms, movements, his voice, way of speaking, can you see his radiance etc. If this knowledge is sought through prayer; one could ask "who are you Budai?", "can you show yourself to me?".  Once or as this knowledge is gained it would be useful to describe him, even outloud; "you look so cheerful and lighthearted".  What would he do?

Step 2 - entering into a relationship - 2nd person perspective (we)
This step consists of relating to the Budai. Soimagine talking with him, pretend to do so outloud.  Or if you believe it possible actually try to contact him through prayer and meditation.  Ask him questions, for his opinion, how would you approach him in person? Most likely as a stranger.  How would he respond to you? Probably accepting you joyfully! Full of love! Your fear would probably rapidly decrease and you would open up to your new friend.  The more real he seems to you the more powerful the next step will become.  But even if you were to stop here.. Imagine if you truely had a friend with you who was this cheerful? What kind of influence would that have on you? I am sure life would be so much more joyous.  Can you think of yourself in relation to him as we or us? "Budai, I can't believe this happened, what should we do?" and he says: "We need not do anything my dear friend! This happening is a Gift for us.  Experience.  Let us put it into my sack of treasures and carry on!" It is important to speak his perspective, to feel his presence, let his being with you, talking with you influence you.  The more real, the more real.

Step 3 - Embodying/Identifying - 1st person perspective (I)
"Fake it till you make it"  Through the process of acting, one can gradually become more and more like the thing one acts like.  So naturally at first it may fake, as it may be so opposite to ones normally personality.  What would he say? what would he do? Well you would know if he was your dear friend.  So then impersonate him.  Even make that impersonation of him to him, perhaps at first.  Don't be shy, we all know he would laugh joyfully at your attempt.  What else would he like but for you to be another carrier of Love, Light and Joy.  Dress as him even!  Try first at home then with others.  If you persist, you will succeed. For if your goal is to become him, then you will find that you are Budai! and you were the friend of your old self this entire time teaching your old self, how to become the person you were destined to be.
Any feelings of disgust in the process comes from, amongst other things, rigidity of your identification with your old self.  And in a sense all the obstacles in the way of your Enlightenment, this amount of time this really takes is bound up mostly in how much you want to become him.  If you seek that above all else, and will not stop until that moment comes, then it is assured.  "Yoga(union) is for the willing"

If you have any questions about the process feel free to comment below and I would be happy to help :) 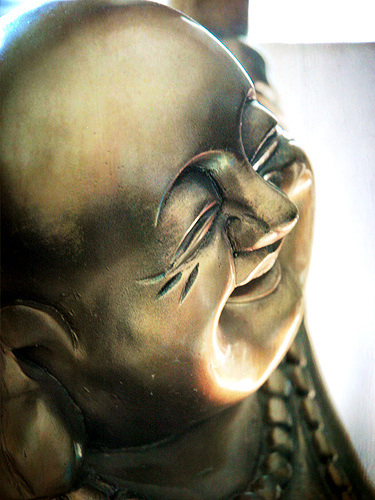 Odometer For Website
a practical philosophy for improving ones quality of life by cultivating greater awareness, understanding and application of our entire being including spirit, mind and body