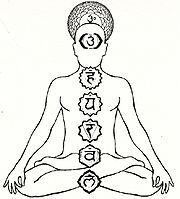 Kundalini (kuṇḍalinī कुण्डलिनी) Sanskrit, literally "coiled". In Indian yoga, a "corporeal energy"[1] - an unconscious, instinctive or libidinal force or Shakti, envisioned either as a goddess or else as a sleeping serpent coiled at the base of the spine,[2][3][4] hence a number of English renderings of the term such as 'serpent power'. Kundalini is considered a part of the subtle body along with chakras (energy centres) and nadis (channels). Each chakra is said to contain special characteristics [5]. The overall concept has many points in common with Chinese acupuncture.

Yoga and Tantra propose that this energy may be "awakened" by such means as austerities, breath and other physical exercises, visualization and chanting. It may then rise up a subtle channel at the spine (called Sushumna) to the head, bringing psychological illumination. Yogis tend to attempt this alone, Tantrics in couples, both usually under the instruction of a guru.

When Kundalini Shakti is conceived as a goddess, then, when it rises to the head, it unites itself with the Supreme Being (Lord Shiva). The aspirant becomes engrossed in deep meditation and infinite bliss.[6][7]

a practical philosophy for improving ones quality of life by cultivating greater awareness, understanding and application of our entire being including spirit, mind and body